Tybraes is an unforgiving world, splintered by races at war convinced their fundamental differences far outweigh any common ground. The botanic, fey Erahs seek to remain hidden from the violent warring of the leporine Shae and the red giants, the Ganroth. When an Erahs “Blade Spirit” is found, a gifted time-bender of a lost monk order, the Nelenr, the Shae claim Khes Adaia for their own-- a weapon in their war against the Ganroth. In truth, she is a single cog in a much larger machination against the Ganroth's waking old god, Uvall, who threatens to consume them all. If the mystery of “The Motherless,” why Khes is so important, and how to kill a god is not discovered, a petty political coup will be a good day in Tybraes. They simply need more time.
Some content may be considered sensitive for some readers.


Many blessings from ['The Heart'] of Tybraes [gifted with diplomacy] to you, children of the Land called Earth.

Throughout the cultures of Tybraes there are celebrates and holy days to mark the occasions similar to those we have in our world. Celebrations that mark the coming of Spring, the Vernal Equinox, religious holy days that coincide with this time of the year either by coincidence or, by nature of the religious doctrine and dogma. "Renewal" is a concept that holds far more meaning than that or a mere Springtime celebration. It carries great cultural and spiritual weight across the cultures and ties to historical events of Tybraes as Spring coincided with the end of a massive war and the declarations of peace between the warring factions. It is when accords were finally sealed and there was true "Renewal" to begin among the people.  The budding of new life in flowers and newborns took on a significantly symbolic meaning.

While we here on Earth celebrate our home, be it from a conservationist view, a spiritualist view or as one of the millions marching today in the name of Science for the future of humanity's survival, the world of Tybraes, too, celebrates much in the same ways.  They honor the life flourishing that feeds them, homes them. They worship the deities that some believe created, are, or reside within all living things.  Some rally in protest that it is not enough. Tybraes can still be better, they can all do better.

I wanted to do something a bit more... profound.  Life, however, does what life will do, and this is not always as we shall have it.  Therefore, rather than the grand picture I originally had planned, my silly little sketch (which I tried to clean and dress up a bit, at least, for the occasion) will have to suffice.  Bear in mind, I doodled it last night while waiting for my insomnia medication to kick in... and I was watching anime so... take that as you will. (Hah!)  Bit of inside, tongue-in-cheek joking about, but I sent our beloved little group on a picnic.  Originally planned for Pelleas to be in it too but, meds kicked in so... wah-wah-waaaah... It's fine though. Nelah had a witty-quip to make up for his absence. ◕‿↼

I do hope you have a wonderful Earth Day. Try to take a moment outside, even if it is just for you ten minute work break. Even rain can be soothing in the city if you let it. Love our planet. Let us all try to do better and fight for our home, for the future. Just because we won't be here for all of it, doesn't mean it's not important now.

When Comes the Firetide: Inundation | Book One and Reference

Below you'll see chapter listings for the stories.
The chapters update on the front page as they are posted, but you can find easy links in the chapter list. So don't worry about losing your place.

Although posted for the world to see-- This is a Work In Progress. As a WIP feedback is appreciated. Also keep in mind the final book offered for purchase may vary greatly. Some comparison samples may be posted beforehand to give an idea of the changes. Additional material will likely also be included in print.

You are free to trash, praise, correct, pick apart, or laugh at anything I post. I will take it in stride. Hate speech of any kind will be deleted, however. No exceptions.


Enjoy, and thanks for reading!

PART ONE AVAILABLE FOR PURCHASE ON AMAZON 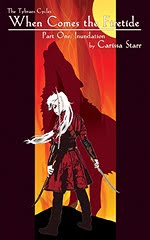 To write something with so much world building, I have to keep a lot of notes. I keep track of my races and the sub-cultures within those races, their languages, cultural terminology, the general geography, as well as general character notes. It is a lot for me to keep track of, so I can imagine, if I do a poor job of it... you might get lost or forget something. So I will occasionally update this with links to files of my notes so you can have a quick reference. AND if I make a mistake, you can call me out and we can hash out which way is better. I also have things like pronunciations on it.

Note: I have tried to be "Spoiler Conscious" in these notes, but I may have missed something - so please read with caution.

As I am developing the Erahs language of Etharhia, and beginning working on filling out the Ganroth language of Valkosa, the vocabulary file will occasionally be updated.
I may also, occasionally make minor updates to the words or phrases used within the text per chapter post, as I solidify a more proper syntax and grammar for each. It will not affect the overall meaning of these things in English, however, and is more for my own obsessive gratification.
In the future, watch for a full dictionary with translated poetry, songs and folklore available for purchase as an ebook and possibly in paperback.

Songs I listen to while writing...

Or a Quick Tip for Coffee

I'm always looking to increase my knowledge as well. Here's a list of books that I'd love to check out. New, used, downloadable. It's the info that matters!